Why You Shouldn’t Ever Go To Apple For Repairs

Today I received a call from people who told me they took their macbook pro a1502 2015 to the apple service department (NOT-SO Geniusbar) because it was shutting down. Apple kept it for an hour in the back and then came out and said they needed to replace the logic board on it. because it was bad.

So naturally, macbook pro owners got shocked and decided to come to us for a second opinion. and im glad they did.

it took me about 15 minutes to find out what was wrong with it. In fact, it was actually pretty much visible to the naked eye what was wrong.

it was not a logic board failure. because if you know anything about computers you know how to figure out if the logic board is really at fault.

However, Apple did none of those things. they just kept the macbook pro in the back, probably without even opening it. See their procedures are to diagnose at their best ability. and their best ability is some kids off the street filling out applications and hopefully being accepted for a summer job pretending they know how to fix computers on resumes, just because they have used one and pressed some keys on it at some point in their lives!

when I looked at it, I saw almost right away that one cell of the battery looked more expanded than the others. to the point where it had some tiny marks on it, from pressing against the lid for a while.

And again, if a technician knows anything about macs, he would know almost immediately that apple batteries go bad by expanding all the time. and in this case, the battery was shorted out somehow and made the macbook pro a1502 shut down intermittently.

When I disconnected the battery and ran the macbook pro on adapter power only, it was working just fine! no logic board replacement is needed! voila! couple hundred dollars saved! and no need to replace parts that dont need to be replaced! imagine that! All this MacBook pro needed was a1502 Macbook battery replacement!

stop by for a quick repair at the fastest mac repair and pc repair Newbury Park, ca 91320 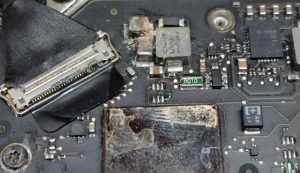 this macbook came in because the owner has spilled some coca cola on it. and low and behold the damage was obvious. as result macbook air 2015 screen was dark and wouldnt come on at first. however up on closer examination you could actually see something on macbook air screen if you took a flashlight and shined some light on to it.

this is known as a backlight problem. what water damage has cause on this macbook is the backlight fuse to be blown out. therefore no power to backlight  and that means, dark screen!

we were able to fix this macbook air 2015 in only 2 days! everything back to normal!

call us now if you have water damage on your macbook. we can help!

turn around is quick and guaranteeed to work. no need to buy new logic board at apple store!

Meet The Owner
Hello my name is Eddie.

I opened my first computer store, after i looked around to notice that people didn't have a proper place to repair their computers at.

Most mac repair places take days to repair. Not because it takes so long to repair them. but because most shops are incompetent or have bad work flow. Hence they fall behind and as result customers have to wait for repair to be completed much longer.


It is similar (if not worse)with companies like Geek Squad(Best Buy), Genius Bar (Apple), Asurion(UbreakiFixit). They hardly do any inhouse repairs. Most of their computers get shipped out to manufacturers or other repair centers.

So again, people like yourself, have to wait 2-4 weeks get their computer back.
For that reason i was on a mission to change this industry and get computers fixed as fast as I can. So you and your family can get back to their zoom meetings as quickly as possible!
Another reason you should come here is because I fix most of the people's computer in the area anyway. Most just collect them and send them to me or I usually have to take care of their customers because the "other computer geniuses" break something and computer still ends up in our repair shop after that. I'm not saying that I'm perfect. I also make mistakes sometimes or sometimes get overwhelmed and forget something. But that doesn't happen very often. and if it does. It happens because of my own error or accident, not because I'm incompetent nor do i need to hide it by telling you to just go buy anohter computer cause this one is not fixable. Like other people do. I write this, because i really take it personally. And i don't understand why people have to lie instead of telling the person they don't know how to fix it. and just tell them to go look for some other options. I take this service seriously. I love doing it and i love providing nothing less than a truly NO-BS-Excellent service to people who come visit me! hope you will be one of them! Oh yes, and also in my free time i get out of town and shoot landscape photography! feel free to stop by our shop to see my artwork!