Yesterdays macbook air with coffee spilled repair was quite lucky for the owner. We took computer apart, did a little board clean up. Then we let it dry for a while. Then checked the voltage on internal components, they checked out ok. Then put it back together and it worked! Good news for the customer!

However that is not always the case! And most importantly, i am getting tired of explaining to people, the fact that the first thing you want to do if you happen to spill coffee or water on your computer by accident, is to disconnect it from power source! which means unplug adapter and disconnect the battery.

Apple of course doesnt help you much with this. Especiall when they started using pentalobe shape screws on the bottom of the lid. they are the type of screws that NO ONE has a tool for them in their house, unless they have bought it on purpose. So i understand you completely if you tell me you are not able to open the lid on a macbook fast enough, because you dont have a proper screw driver to do it! not many people do!

That’s why if you spill coffee or water over your macbook air, you must rush to a nearest computer shop in the area and ask them to open it ASAP and disconnect the battery!

I can’t tell you how many macbook airs could be saved if people just did that. But they don’t!

What most people do, is they plug it in hoping macbook air with coffee spill will still work and if it works they get excited, but then 10 minutes later it stops working and they get very sad. Because they don’t understand two things:

And i can’t even tell you how many times people call and tell me same story. I just had another conversation today. they spilled water over macbook. and they tried to plug it in to see if it still works. It did work for 3 minutes. but then it died. Now they have to pay to fix it.

But if they just left it alone. turned it off, brought it to a computer shop like ours. We would clean it up, dry it out and the macbook air would be in perfect working condition!

Moral of the story! don’t be like most people! if you have coffee spill on macbook air, turn it off immediately and bring it back to fastest mac pc repair in newbury park, ca (fastest mac repair in thousand oaks area)! and we will take care of it for you and most likely it will work, just like the one with coffee spill in the picture!

Macbook air keyboard replacement is a pretty tedious job. Mainly, because apple started “welding” their keyboard to the cases. it means, there are no screws at the bottom of the keyboards anymore. all because apple wants eliminate repair shops and make repairs for people more difficult and more expensive. Instead they want you to call apple and wait in line 2 weeks for an appointment so they can replace it for you for the price triple of what it should be!

So you best don’t spill coffee or any other fluids on your macbook air (or any other macbook), because it will usually cost you arm and a leg to replace the whole palmrest on a macbook. especially on the new ones models!

however, if you happen to spill some coffee on your macbook air and your keyboard stops typing certain keys, or some keys will be sticky, or perhaps your computer won’t even turn on. Then you can try calling us. and we might be able to help you. we have some used parts that might be cheaper to replace or we can find another solution for you! so you don’t have to go buy a new macbook and or spend more than what you paid for computer to repair it!

Persons macbook air in the picture, had some coffee spilled on it and was still working after it was dried out. However after a while it wouldn’t start properly or it wouldn’t type certain letters. After quick diagnosis, it was obvious that the keyboard was at fault.

it took 45 minutes to do macbook air keyboard replacement and it is back to life working perfectly!

Unlike few other repair shops in the area, we do not outsource our repairs to anyone and repair everything in house, fast and well! 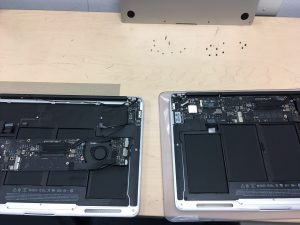 these two macbook airs came in from same person! they both had fluids spilled and both were not turning on. imagine your kid spilling water not on one but two macbook airs almost in the matter of days! pretty scary situation!

even though the source of damage was the same -fluid, the results were not. one macbook air water damage repair was simpler than the other. first one still had charging light coming on. which always means there is better chance of survival and it did. upon opening macbook air and inspecting internal components it was clear there was water damage, however it was not so bad looking. therefore we proceeded to clean up the logic board by removing all visible and invisible corrosion from it. then we let it sit and dry for a little while and when it was visibly dry the board was reassembled into computer case and we tried to turn it on! and bam! it was working like before (or even better) 🙂

second macbook air water damage was not so lucky. the charger light was no longer coming on. also water spill was much larger and the simple clean up did not help to revive it. upon testing couple of components it was clear there was circuit damage on the logic board. therefore this macbook air water damage will need a more extensive repair, which takes a little longer. but most likely will be fixed too! usually it takes 3-4 days with us!

now if you are going to learn anything from this check this out! as i was explaining this to the customer. the fluids do not damage computers. you can put logic board in water and hold it there for an hour and take it out, let it dry and it will work as it did before. so do other components. i used to have a customer who used to wash her keyboard, cause she thought they were disgusting in dish washer! she would let them dry out and they would be working perfectly. so its not the water that kills them. it’s electricity mixed with water.

when water gets onto computer and computer is still being fed electricity (usually from battery) that is when wrong contacts are being made on the logic board or other components. its like when you have two prongs in electrical outlet on your wall and separately they just sit there and nothing happens. but try to put ends of a wire into both of them and see what happens. you will see sparks flying and something melting fast! its because they are not supposed to touch together. yet water does that when it gets on board.

so the best thing you can do in situation that has fluid spilled on their macbook or laptop is not only to flip machine over so the water runs out. but you have to disconnect battery immediately! of course apple doesnt make it easy to do! but if you discount that part and have proper screwdriver you can do it! and do it right away! then you will save your computer!

if you’re looking for reliable, quickest mac repair or pc repair service in thousand oaks area call us at 805-585-5535 or stop by at 3339 Kimber dr. Suite D, Newbury Park, Ca 91320 www.fastestmacpcrepair.com check out our reviews on yelp https://www.yelp.com/biz/fastest-mac-repair-and-pc-repair-newbury-park-thousand-oaks

Meet The Owner
Hello my name is Eddie.

I opened my first computer store, after i looked around to notice that people didn't have a proper place to repair their computers at.

Most mac repair places take days to repair. Not because it takes so long to repair them. but because most shops are incompetent or have bad work flow. Hence they fall behind and as result customers have to wait for repair to be completed much longer.


It is similar (if not worse)with companies like Geek Squad(Best Buy), Genius Bar (Apple), Asurion(UbreakiFixit). They hardly do any inhouse repairs. Most of their computers get shipped out to manufacturers or other repair centers.

So again, people like yourself, have to wait 2-4 weeks get their computer back.
For that reason i was on a mission to change this industry and get computers fixed as fast as I can. So you and your family can get back to their zoom meetings as quickly as possible!
Another reason you should come here is because I fix most of the people's computer in the area anyway. Most just collect them and send them to me or I usually have to take care of their customers because the "other computer geniuses" break something and computer still ends up in our repair shop after that. I'm not saying that I'm perfect. I also make mistakes sometimes or sometimes get overwhelmed and forget something. But that doesn't happen very often. and if it does. It happens because of my own error or accident, not because I'm incompetent nor do i need to hide it by telling you to just go buy anohter computer cause this one is not fixable. Like other people do. I write this, because i really take it personally. And i don't understand why people have to lie instead of telling the person they don't know how to fix it. and just tell them to go look for some other options. I take this service seriously. I love doing it and i love providing nothing less than a truly NO-BS-Excellent service to people who come visit me! hope you will be one of them! Oh yes, and also in my free time i get out of town and shoot landscape photography! feel free to stop by our shop to see my artwork!